Before Louden Noxious can call out the remaining entrants in the tournament for a photo, he’s interrupted by referee Bryce Remsburg. Bryce says that they received a phone call today and were informed that one of the participants, Jason Blade of ROH job guy fame, is a weenie and won’t show up. Instead, they’ll draw names from a hat. The first name drawn is Matt Borne, to which the crowd reacts incredulously, but he’s not here. Next name drawn is someone named Evan Sydal but he’s likewise missing. The crowd laughs at the goof but are perplexed by the third name, which is Christian Faith. But…

Hey it’s backyard wrestling legend Christian Faith, better known these days as Rickey Shane Page! He’s the last entrant into the tournament… at least for now. Worker Ant’s name is called but he doesn’t show up even after a bunch of stalling, so they move on to the rest of the field and take a picture without him, saying they’ll worry about replacing him if need be when his match comes around.

WOOOOOOOOOOOO, IT’S MY DUDE KYLE MATTHEWS. In a real departure from his work that I’m more familiar with, he’s a cocky Hollywood heel and sadly a bunch of people in the crowd call him gay and/or slurs due to the fact that he’s got flesh-colored tights on. Still, he’s great. He’s real forceful and crisp in everything he does, if a little impersonal. That cold detachment sadly doesn’t mesh well with a guy like Lince, who’s always been awkward and has slowly been losing the crowd. They also make the mistake of going relatively long by YLC standards but all in all this is still a solid match. Wish Matthews stuck around in Chikara longer, at least under this name. Lince gets the best of a battle on the top rope and advances by way of the shooting star press.

Steve “the Turtle” Weiner is stoked to be in YLC and yammers through a whole bunch of stuff before saying that for all the similarities between him and Ophidian, turtle power is going to make the difference.

Steve “the Turtle” Weiner vs Ophidian

Ophidian flattens Weiner with a flying knee as soon as he gets the chance, really stomping a mudhole in him in the opening minute. Hellertown’s 100% behind the hero in a half shell but he struggles to do much more than a rollup here and there. Weiner’s able to make a comeback once he starts using the hard exterior of his shell as a weapon but he loses it going for a spear into the corner, allowing Ophidian to slip into the Ophidian Death Grip and put him away.

Big ovation for Weiner afterward and he salutes the crowd with a bow.

In the back we’re treated to the sight of a very young, very wet Chip Day. 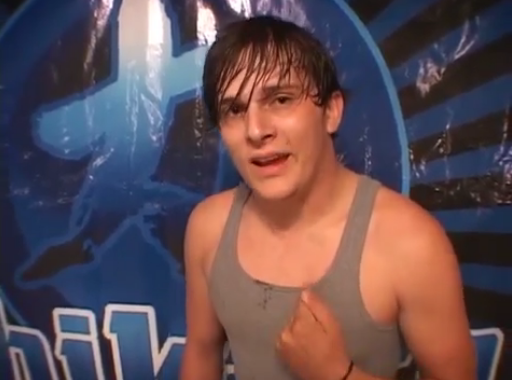 He was sent up here to Chikara by the folks at NWA Anarchy because they believe he can bring the Young Lions Cup back to Cornelia, Georgia. Chip believes in himself too and he plans on taking the cup home.

When he and Director of Fun Leonard F. Chikarason get to the ring, they reveal that Vin Gerard attacked Worker Ant earlier with a pipe. As much as the ant wants to fight, Chikarason can’t with good conscience allow him to compete, so instead they call out the rest of the Colony. A woman in the crowd actually gasps when they do so, bless her soul. They settle on adding Fire Ant to the tournament so he sticks around for this next match.

Chip sprints to the ring swigging a can of Mountain Dew and has on a pair of dark green, lime green, and red shorts that say “Do or Die” in the Dew font, which is a level of regrettable early-career gimmick that I never thought I’d see. Anywho this is real good. Chip’s got the explosive power I’m familiar with these days as well as a youthful speed that serves him well against a guy like Fire Ant. He eats THE MOST shit on an early tope but does well to recover from it, staying with his energetic opponent right until the end. As Fire Ant makes a comeback, Vin Gerard tries to sneak in the ring and go after him, but he’s treated to a faceful of crutch by the injured Worker Ant. Beach Break sends Fire Ant to the semis.

Real battle of the AIW regulars here, not that Donst’s made it there by this point, I’m pretty sure. Crowd isn’t into this much due to the fact that Faith’s a faceless, voiceless powerhouse no one here’s familiar with and Donst’s a guy in the midst of a confusing gimmick, but they still marvel at some of the cooler things the masked man does. Donst struggles against the biggest man he’s probably ever faced so far in his career but the Chikara Special makes up for lost time and secures the victory.

Cutting his first solo promo in a bit, Shayne Hawke vows to take home the Young Lions Cup before he and Mitch win the Campeonatos de Parejas next month.

Sadly the shortest match of the tournament. Dempsey always leaves me wanting more. He adapts well into the lucha stylings of Chikara, proving once again that he’d be a better fit here than in ROH, but before too long Hawke sends him packing with a flatliner.

Hawke makes sure to get a hug from Mitch Ryder on commentary before he returns to the back.

Deep in the bowels of the Hellertown Starlanes, Marshe Rockett and C-Red are over the moon at having the opportunity to take the Young Lions Cup back to Chicago. Whether they win or not, they’re gonna be singing and dancing all over Hellertown tonight.

Late 2000s/early 2010s underwhelming heel Gargano would probably be a shock for people who are only familiar with his WWE work but sadly I know this era of his career all too well. Still, his too-clever-for-its-own-good offense fits better with a young heel character than most anything else he’s done and at this point in time it’s not overly grating, so in wearing down his fellow Midwesterner he has a decent match. Rockett’s real athletic for such a tall man but Gargano’s every bit as slick and far more maneuverable, meaning that the Chicagoan has to struggle for even the simplest offense. In the end it only takes one big move, as Rockett catches Gargano in an ace crusher coming off the top and it’s enough to send him to the semi-finals.

The Super Smash Bros. argue about the merits of hot dogs and hamburgers backstage before turning their attention to their opponents for tonight. One way or another, Mike Quackenbush and Shane Storm are getting pwned.

This is great and sort of a bittersweet end of an era type thing. He’ll keep tagging with his students in the future, finding some great success with them as a matter of fact, but this is sort of the end of Quack and his star students being the focal point of the company since they’ve now got enough beloved tecnicos to carry the weight on their own. Early on here he and Storm are able to dominate the Canadians with a mixture of clever matwork and cohesive teamwork but the Smash Bros. do a lot to make up for lost time when the pace quickens. It’s nothing earth-shattering but it’s a fun, friendly tag on a show about bigger things. Double stomp/Air Raid Crash combo makes Quack and Storm the third team to get to three points in the space of two shows but sadly they don’t get time to celebrate…

Right as Storm’s going for the pinfall, Tim Donst runs down to ringside and heads straight for Quack, whispering something in his ear. Quack can’t believe what he’s hearing but his eyes turn red as he glances across the ring at his partner.

Everyone is baffled at Quack’s actions but he and Donst run off after Storm before they can explain anything.

The Neo-Solar Temple have Hydra in their corner but when he tries to initiate a fun huddle between them like the Soul Touchaz do before every match, UMB orders him to the back to attend to Donst before the main event. No one is happy to see Hydra leave, least of all me. This is a real simple thing relying on the crowd’s love of the Chicagoans and the textbook heeling of the masked men. Quite like the Willie/Crossbones matchup and I’m glad to see Crossbones back for the first time in what feels like forever. Things fall apart in an unsurprising way toward the end but the rudos are able to lay out Willie with a wild superplex before Crossbones cleans up on Jaz with the Here It Is Driver. Temple at two points now, surprisingly.

Solid enough match I suppose. The mix of styles here aren’t as varied or interesting as in the other semi-finals but at the very least most of these guys know each other well by this point, so there’s barely any awkwardness. Sadly Hawke throws another jab at Lince about his seizure in the first minute or so of the match, so that sours basically everything that follows for me. First elimination is neat though, as Rockett goes for one of those awesome leapfrog rollups and Lince’s able to reverse it into the Chikara Special to send him packing. Ophidian manages to pin both Lince and Donst with a pair of European Clutches a minute or two later but when he goes for the same move on Fire Ant, the insect’s able to reverse it into a victory roll. Hawke tries to get rid of Fire Ant quick but he doesn’t have the same firepower as other sneaky rudos, leading him to attempt a flatliner off the top rope. Fire Ant fights free and hoists the smaller man up for a gruesome avalanche Beach Break, sending this last-minute entrant to the finals of the Young Lions Cup.