Release of this show features the first instance of a long-running, perhaps oft-derided tradition: Louden Noxious playing the guitar and singing a song he wrote about Chikara.

It’s quite silly but I appreciate it. Louden 4ever.

Show proper opens with the Fabulous Two strutting their stuff backstage. Mitch Ryder says it doesn’t matter who he and Shayne Hawke are wrestling tonight. All that matters is them getting two points tonight. If takes them beating the hell out of Create-a-Wrestler and Player Uno then that’s just what they’re gonna do.

Real foregone conclusion and not a terribly great one either. The Fabulous [Number]’s shtick is great but it needs someone animated and likable to really work and while CAW and Uno are the latter they’re not exactly the former. Eight minutes of kind of dull shouting and cutoffs and the like. Spike piledriver gets the Two to two points.

BOBBY DEMPSEY’S BACK, YEAH. HELLERTOWN LOVES HIM TOO, WOOOOO. Sadly it’s only in a quick little semi-squash for Ophidian’s sake. Bobby gets to hit an awesome slam or two but the Ophidian Death Grip soon spells his end.

This really rules and has me hopeful for tomorrow’s title match. Amasis is super athletic and Hallowicked can do just about anything in wrestling so they match up quite well in a fireworks-heavy midcard match. The rookie goes after the champ’s arm with fairly ferocious work and Hallowicked does real well not to just sell it but to make Amasis work for it. He takes too long gloating on the top rope, though, allowing Hallowicked to chuck him across the ring and muscle his way into a comeback, blasting the smaller man with some mean, mean strikes. Critically, Amasis doesn’t recognize when he’s outmatched, allowing Hallowicked to just blow him out of the water for a while before quick thinking helps even things up again. Likewise he gets too hung up in arguing with the ref after a kickout, allowing Hallowicked to catch him with a yakuza kick and push through the pain to hit a Rydeen Bomb for the win.

Hey, Pelle’s back too! Wish all the good ROH students would just jump ship to Chikara already. There’s only like three of them, not like there’s not room for them here or anything. Anywho this is real fun. Pelle does his thing, making up for his diminutive size in neat little ways as he tries to overcome Icarus’ rudo styling. We see a bit of Icarus’ psychotic side here, first time in a while, but it’s only a bit because out of nowhere Pelle gets the three with a schoolboy, holy cow!

Director of Fun Leonard F. Chikarason heads to the ring and congratulations Pelle on the upset win, saying he’s glad to see him here tonight… and he’ll see him next month in the Young Lions Cup. PELLE’S GONNA WIN YLC BABY, YEAH!

PSYCHO grunts through a quick promo from the depths of the Hellertown Starlanes.

PSYCHO vs Lince Dorado vs TJ Cannon vs Helios

What a group of guys here. PSYCHO’s a stalwart of the Japanese indie scene, being a Kaientai Dojo trainee who’s spent most of the last decade in places like Gatoh Move and HEAT UP under a few gimmicks, most notably the Darkness Crabtree-esque Gabaiji-Chan. Cannon’s an East Coast indie dude, one half of the Best Around with backyard legend Bruce Maxwell, the longest-reigning CZW tag champs ever. The other two are some nerds I’ve never heard of, I dunno. They all work pretty well together despite a good deal of unfamiliarity, with a lot of snappy, direct work that wastes no time. PSYCHO eliminates Cannon with a pretty nutty springboard Swanton but gets sent packing by a hurricanrana from Lince. The two regulars knock each other around but the larger man is able to make the most of a battle on the top rope. Helios forces his way into a rope-hung Meteora and hits a standing shooting star press to head to the finals.

As everyone comes back from intermission, Eddie Kingston arrives and cuts a great little promo:

King’s been gone from wrestling for a little while, missing bookings in Chikara and IWA Mid-South due to what are described as ‘personal issues’. That’ll recur a few times as his substance abuse problems come and go up through 2013 or so. Glad the guy made it through but man it’s gonna be rough watching him sometimes through the rest of this project. Loved both him and Storm in this promo, though. Pumped my fists in the air when Storm immediately slapped him back.

Backstage, the Order of the Neo-Solar Temple cackle about the progress their newest member has made. The hooded Tim Donst has his back to the camera, hiding his face, but when they all enter for this match he reveals he’s only got half a face’s worth of bad KISS makeup so I get it.

Good, not great. Big problem here is that Donst turning rudo(ish) simply turns him into just any other guy, as he’s not quite experienced enough to be all that aggressive and malicious yet. So he’ll do some moves and make some cutoffs but there’s not the energy and animosity behind it that you need from a good heel, or at least a heel that works well with guys like the ants. Another issue is that they place a lot of stock behind Donst here, enough that he’s leading a bunch of control segments on all three ants, and the Neo-Solar Temple just aren’t the kind of guys who should be doing that. Things don’t improve all that much when the tecnicos make their comeback either, as everyone’s rather lifeless and/or sloppy at points. On top of everything this is far and away the longest match of the night so far, so it feels especially dull after the preceding quickies. Just kind of a weird match all around.

Eventually Hydra, who’s been bullied by the new pet project Donst all match, is left alone in the ring with the ants. Before they can hit the Ant Hill, a masked man hops in the ring and dashes away, soon revealing himself to be Vin Gerard. Soldier Ant and Worker Ant go after him, leaving a confused Fire Ant to fall victim to a crucifix pin by UMB. Referee Derek Sabato’s tied up with everyone else out on the floor so he’s real late on the pin and thankfully Fire Ant has the good sense to kick out to not make himself look like a total dweeb. All the same UMB spikes him with the Praying Mantis Bomb for the win.

In a cute little promo, Mike Quackenbush hypes up Shane Storm backstage. Storm’s worried about F.I.S.T., some of the most dangerous guys in the company, but Quack reminds him that the two of them are two thirds of the original Kings of Trios. Chuck Taylor might’ve won the Young Lions Cup but Storm did too and he held it the whole year unlike the Kentucky Gentleman. And Gran Akuma? Storm took his mask years ago. Together they’ve got nothing to worry about. F.I.S.T. is only the first stepping stone on their way to three points.

Zero points each for these permutations of long-running teams. This match is alright. I question their decision to go about as long as the tag before them but it’s kind of the least of their problems. Early portion of this match features a lot of jaw-jacking from Chuck, which includes a bit of coy homophobia that feels worse with every passing year and doesn’t land particularly well with Hellertown. Action picks up once he and Quack tag out but between Akuma and Storm there’s plenty of opportunity for sloppiness and we get more than a bit of it here. Thankfully there’s still enough talent and personality between these guys to make for an enjoyable match, especially when things break down after Quack’s hot tag. F.I.S.T. aren’t able to score with a pair of awesome combos of signature moves and fail to stay in control against the two tecnicos. After Storm takes out Chuck with That Japanese Move on the floor, Quack spikes Akuma with a double stomp as Storm has him in a cutthroat Air Raid Crash. Crowd goes nuts as the good guys get the three. 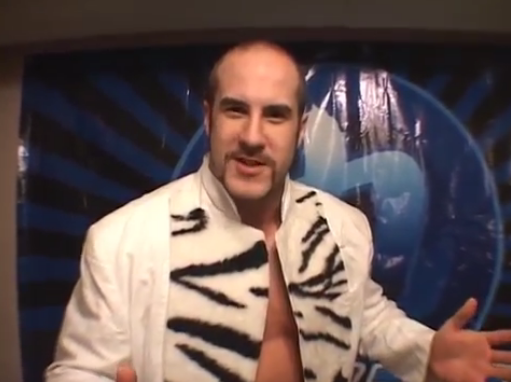 He says the last time he faced off with Jorge “Skayde” Rivera, it was way back in the 2006 Tag World Grand Prix. A lot of things have changed since then but Claudio won the match in 2006 and he plans on winning again in 2008.

Great stuff. Claudio’s name doesn’t really come to mind when you think ‘llave’ but he’s an incredible base and manages to work with whatever the maestro throws at him, which includes all sorts of delightful holds, flips, and reversals. Crowd’s kind of muted for it (imagine that’s due to these guys being far from the most charismatic people on the roster) and some awkward commentary from UMB and Louden doesn’t help but the action here is as good as anything Chikara’s seen this year. Big man takes control by going after the veteran’s leg and using his size to really torture the guy. Skayde’s slickness allows him to stay competitive but Claudio’s size and explosiveness is too much to contend with for an older, smaller opponent. The luchador manages to slip into a jackknife pin when Claudio goes for the Ricola Bomb but Claudio simply muscles his way on top and hoists him up for the move again, which is enough for the pinfall.

We hear from Incognito heading into the main event. He’s here to win Rey de Voladores and show everyone that lucha libre is the best wrestling in the world.

Incognito vs Stupefied vs Turbo vs Sonjay Dutt

If you’re not aware, Turbo’s a Skayde student who’s probably best known for his time in the Dragon system, first in Toryumon and then in the early years of Dragon Gate. Louden Noxious lists ‘Mistico Original’ among Incognito’s nicknames, which has me wondering how familiar WWE was with the history between him and the original Sin Cara. Anyway, this is fine. I get that Sonjay’s the biggest star on this show but it feels like a bad call to put this on last. Turbo’s brand new, Sonjay doesn’t seem all that interested, Stu’s pretty new to Chikara still, and Incognito is pretty well checked out on Chikara. The crowd is basically dead after the last few matches too, leaving everyone here frustrated about the reactions to the cool stuff they do pull off. Which, hey, there’s a lot of that. Turbo’s great and Stu’s impressive as hell for his age. When they want to the bigger names do some cool stuff too but between unfamiliarity and a lack of enthusiasm, there’s just too much working against this thing. Stu manages to unload a few big moves on Turbo but Sonjay cuts him off and sends him packing with a shiranui and phoenix splash. Incognito catches him with a nifty surfboard a minute later, eliminating him before turning his attention to Turbo. He and Turbo do a few cool moves but take the better part of ten minutes to do it, filling a whole bunch of time with the sloppiest striking and most aimless wandering I’ve ever seen. Hellertown’s into the big spots but is pretty clearly losing faith in Incognito, who’s putting forth by far his worst performance in a Chikara ring. He advances to the finals with a moonsault fallaway slam off the top and although it looks like he lands on his head, he actually hurts his knee doing it. More on that tomorrow.